Before the Streets: Digital Precursors to Mass Mobilization

In my last post I spoke of my desire to see how big the digital activism “iceberg” is, to study the many unnoticed actions that precede highly visible “Twitter Revolutions” and mass digital mobilizations. In my current task for the Global Digital Activism Data Set I am inputting posts from Global Voices‘ “cyber-activism” category. I started out with recent cases and am now back in 2007. And 2007 is interesting.

In 2007, few of the dramatic digital activism cases had yet occurred, but you can see the seeds of mass mobilization. So far, one of the biggest predictor of mass mobilization seems to be active and politically-aware digital communities and smaller digital campaigns. Here I’ll present three examples of the pre-cursors to major digital mobilizations.

Colombia’s great digital mobilization is One Million Voices Against the FARC, a massive international protest movement in the winter of 2008 against the terrorism perpetrated by FARC guerrillas. However, there were several digital precursors to this action. Back in the spring of 2007, bloggers started talking about their own lack of political engagement. One blogger even wrote about the FARC: “There are more than 3 thousand Colombians kidnapped at this moment, which under no circumstance should be allowed.” That same year, a smaller digital anti-FARC campaign was started, Free Emanuel, a popular blog-based campaign to free a young child held hostage by the FARC. Also in that year bloggers helped to organize Colombia’s first Internet Week, both a sign of the growing digital engagement of Colombian society and of netizen’s ability to self-organize. In fact, Colombia had been using digital technology for activism for almost a decade: the transparency web site Congreso Visible was founded in 1998. 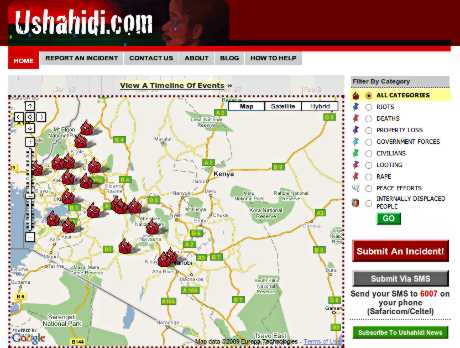 There are other examples of netizen coordination predating important acts of digital activism. The Kenyan Blogs Webring, a community of cross-linking blogs, was born in 2004. Mzalendo: Eye on Kenyan Parliament, one of the first digital transparency initiatives in Sub-Saharan Africa, was created by one of the web ring’s founders in 2006. In early 2008, members of the webring came together to create the SMS mapping software platform Ushahidi in the aftermath of a violently contested election. Ushahidi is now probably the most prominent and widely used piece of software created specifically for activists.

And yes, what about Iran, the most dramatic of digitally-enabled protest? Before people came out on the streets in June of 2009, Iran already had a vibrant and politically-engaged blogosphere, had already seen mass digital campaigns like One Million Signatures for women’s rights of 2006, the 14Mordad blog campaign to free jailed students in 2007, and the 2008 Google-bomb campaign in support of Gaza. There was certainly no guarantee of mass digital mobilization, but multiple contributing factors were present a year before the 2009 protests.

None of this implies the direct causation of a technologically deterministic statement like “strong blogosphere = revolution” but, as in the analogue era, the ability of members of an opposition to create dense networks where they can discuss, coordinate, and mobilize offline make these kinds of actions more likely.

The moral here is not that certain digital contexts lead inexorably to digital revolutions, only to encourage those who seek to read the digital tea leaves to look at the causal factors that have preceded mass mobilizations in the past and to look for the telling details in current cases of digital contestation.