By Any Means Necessary: The Information War in #Ferguson

The current unrest in Ferguson, MO, precipitated by the hot-blooded murder of an innocent black boy by a police officer, is a story whose details have been deliberately hidden, manipulated, and intentionally ignored. Â For this reason it is a difficult story to tell with confidence.

The key witness to the shootingÂ was interviewed by Chris Hayes in MSNBC before he was interviewed by the police. Â Television and print media presented the protests as riots and the victim as a criminal, leading the the #IfTheyGunnedMeDown hashtag, where images are integral.

Protests that are both peaceful and that involve property damage have been met withÂ a military response. Â Activists in Gaza are sharing tips on Twitter about how to mitigate the physical effects of a tear gas attack. Â Tumblr is being used to share information about an individual’s rights if he or she is stopped by police or told to stop filming.

Professional media have been arrested, intentionally tear-gassed, and told to leave the area.

Platforms like Vine, Twitter, and Tumblr are being used to share images and video from the scene. Â A former teacher of the murder victim went on Facebook to share her personal knowledge of the victim. Â Platforms are also being used to amplify one another. Tumblr in particular is playing this role. Yet citizen journalists have also been shot and arrested. 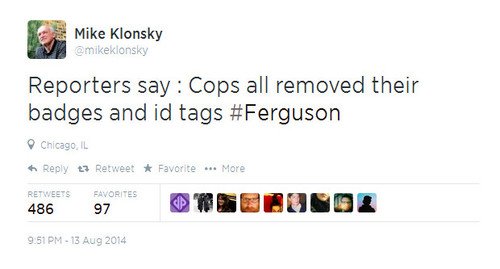 Anonymous, a loose online network of nameless activists and pranksters, have come to the fore, much as they did in Syria and in theÂ Rehtaeh Parsons rape case. Â Their method has become to independently uncover information being withheld by authorities via hacking and then to announce the imminent or possible release of that information in order to pressure authorities to release the information themselves or to stop an undesirable activity.

When the protests in Ferguson first started, members of Anonymous, who share information via a series of Twitter accounts, promised to release the personal information of police officers if violence against civilians occurred. Â Now they have released the name of the police officer who killed Michael Brown, information which has not yet be corroborated.

Another individual, working independently even from Anonymous, located a possible photo of the man. Â In posting the uncorroborated photo he writes:

It brings be great pleasure to photo I.D. the â€œmanâ€ believed to be responsible for the death of Mike Brown. Â Thanks to Anonymous for revealing his name, I went and did a little digging of my own. Take a look. I could be wrong so God help whoever it is Iâ€™m wrong but then again if they can be trigger happy, so can I.

This is the information situation in Ferguson. Â  Even as authorities on the ground try to intimate, banish, and silence those who would share information, citizens both on the ground and online are collecting and sharing information “by any means necessary.”

This is an undesirable information ecology, fraught with misinformation and missing information. Â In the absence of freedom of information, however, it is the only option.