The Internet Surveillance Rap We’ve Been Waiting For

Just kidding, no one has been waiting for an internet surveillance rap, but it’s still awesome. Â Sample lyric:Â “…the internet, it’s empowering humanity. Â We need to get this SNAFU under control rapidly.”

Like war, data cleaning is tedium marked by moments of sheer terror.

The purpose of data cleaning is to ensure that the values on which you will base your analysis are correct (or at least not obviously erroneous). Â The process of reviewing columns of figures for stray commas or (here’s the terrifying bit) finding that a value for one observation is erroneously associated with another observation demands high focus but provides few thrills.

I’m currently cleaning data for the Global Digital Activism Data Set (yes, after 3 years we will very shortly have results worth using). Â In order to keep my brain turned on I am relying on pop music (Katy Pearce also recommends this method for energized academic writing). Â My current favorite: Robyn. Â Enjoy with me:

Everyone telling you to see it is right. Â It’s better than the trailer (below).

Knowing the ending from the beginning will not prepare you emotionally. Â You’ll leave the theater as if you were hit by a truck carrying hundreds of years of history – and you were.

It’s the continuation of an argument for the value of black male life, an argument that (shockingly, shamefully, sadly) still needs to be made in America.

Bonus point to narrator Richard Feynman for describing the grandeur of the physical universe as female.

Awesome Posters from the “Stand with Texas Women” Rally

Women is Austin again pushed back against an attempt to curtail their reproductive rights. Â Though Governor Perry called a special session today to pass SB 5 , after 30 minutes the legislature recessed again until July 9th. 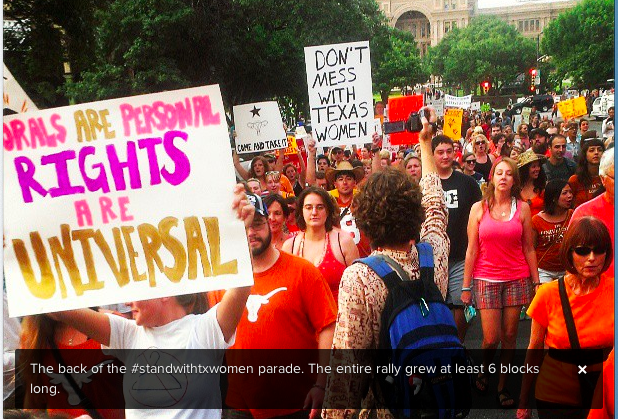 END_OF_DOCUMENT_TOKEN_TO_BE_REPLACED

The Tipping Point of the War on Women?

I’m a little slow in getting to this (just back from vacation) but am no less amazed by my sisters in Texas and their “people’s filibuster.” Â With their bodies and their voices they refused to let the conservative legislature pass a bill on July 25th that would have drastically curtailed access to abortion in Texas. Â This is what nonviolence looks like, what democracy looks like, what direct action looks like. Â Truly amazing.

I’d love this to be the tipping point of the War on Women, the point where women stand up and say “no” to efforts to limit our rights, the moment when America’s women finally say “enough!”. Â The oppression of women will end at the moment we decide to end it. We are many and we are powerful. Â I hope these activists come back with double force on July 1st when Rick Perry again attempts to pass the bill through a special legislative session. 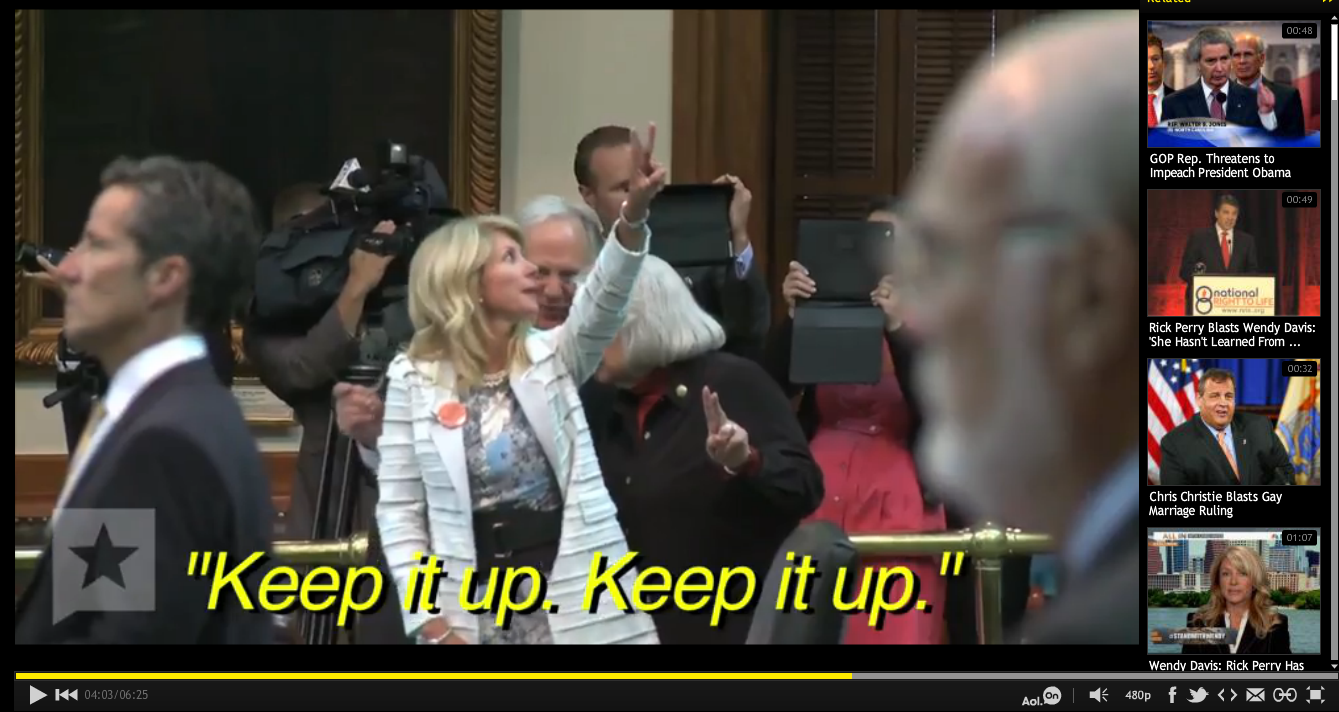 Senator Wendy Davis, who started the filibuster on the Senate floor, encourages the activists in the gallery who were shouting down an attempt to vote on the bill.

I can’t seem to embed the link to the above video from HuffPo (the best video on the topic), so click the image to view the video on the HuffPo site.

UPDATE: Â I found a video of the “people’s filibuster” shout-down of the vote. Â (Yes, blocking a legal process that is not democratic is a democratic act.) The source of the video is a nice post from Mashable on the importance of new media in the action.

Edward Snowden, the NSA whistle-blower, gives me hope for democracy. Â Never doubt that a lowly grunt can seriously fuck with the greatest military power on earth. 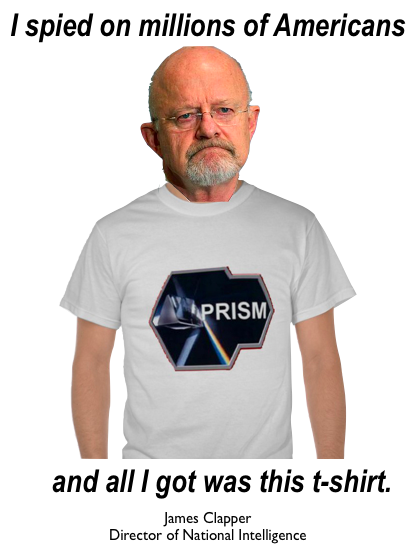 Not only did the NSAÂ try to keep PRISM, their massive andÂ unconstitutionalÂ domestic spying operation, a secret, they are still trying to silence those who seek to draw attention to it. Â Gawker reports that last night a guy trying to sell tee-shirts with the official PRISM logo on it through Zazzle got a cease and desist letterÂ and his store was shut down.

This is ridiculous fascist bullshit. Â It’s clear that James Clapper, Director of National Intelligence, already got a tee-shirt for himself (see image above) and doesn’t want to share.

I think it’s time to put the Streisand Effect into action and do a little sharing of our own. Â Let’s put the PRISM logo everywhere. Â The NSA can see what you’re doing online anyway. You might as well address your content directly to them.

Please share the image above or make your own.

In an otherwise insightful article about the aesthetics and control of Istanbul’s occupied public space, New York Times architecture critic Michael Kimmelman wrote the following sentence, which appears on page A1 of today’s paper:

So public space, even a modest swath of it like Taksim, again reveals itself as fundamentally more powerful than social media, which produce virtual communities.

Digital tools for offline mobilization in 2001. More than 10 years later, people deny the link between online and offline.

The 2002 bookÂ Smart Mobs: The Next Social RevolutionÂ described how in offline mobilization that successfully ousted President Estrada in the Philippines was mobilized through an early form of social media – the text message. Â  Hundreds of thousands of people were mobilized in public space (see photo). Â The “smart mob” was even highlighted inÂ The New York Times’ own 2002 “Year in Ideas.”

The trend of using social media for offline mobilization has continued since then. Â In Egypt’s 2011 revolution, Facebook was used to galvanize the disaffected and was then used to plan the initial protest of January 25th. Â Digital activists then spread the word offline through taxi drivers and printed flyers. Â AÂ master’s thesisÂ on the use of social media in Egypt’s mobilization effort noted that:

It has been pointed out by some critics that social media cannotÂ be attributed too much credit in spreading information in countries with lowÂ Internet penetration, as is the case with most Arab states. However, this ignores theÂ role that social networking online plays in enhancing social networking offline.

In 2011, Occupy Wall Street (OWS) mobilized several hundred offline encampments around the world that inspired the Turkish encampment Kimmelman describes in his article. Â If you go to the WikipediaÂ timeline of OWS, the first event is the registration of the domain name OccupyWallStreet.org, which occurred the summer before the occupation of Zuccotti Park began. Â The original call to “occupy Wall Street Â for a few months,” made by the magazine AdBusters, was done via a July 13th blog post, not via the paper magazine. Â The title of that post is a Twitter hashtag.

The problem here is not really that Kimmelman did not know this. Â He is, after all, an architecture critic, not an expert on digital activism. Â The problem is that his editors didn’t catch the error and allowed a statement that was both false and misleading to be published on the first page of their newspaper.

Print journalism, The New York Times included, is under tremendous economic threat, much of it due to the Internet. Â  If the world’s newspaper of record cannot even accurately report on the Internet’s function and capacities, how can it hope to adapt its business? Â If traditional journalists cannot accurately report on the politics of the 21th century, how will they argue for their own relevance?

The most famous social media naysaying related to the Gezi occupation is by the target of the occupiers’ rage: Prime Minister Recep Tayyip ErdoÄŸan. Â â€œNow we have a menace that is called Twitter,” he noted on June 2nd. â€œThe best examples of lies can be found there. To me, social media is the worst menace to society.â€Â  Â Misinformation can come from more traditional media sources as well.

The Third Wave of #Occupy

In 2011 the Occupy movement realized the fast, cheap, global scaling that one would expect in the digital age. Â The crowdsourced Occupy Research project recorded 488 separate occupy encampments around the world, and France 24Â reportedÂ 951 encampments in 82 countries. The current occupation in Istanbul is the latest iteration of a movement that operates more like a meme.

And then Occupy ended, or rather, it morphed. Â In some ways, Occupy became more global. Â Writing about Occupy London a year later, Kevin Rawlinson of The IndependentÂ interviewed former Occupiers to see what they were up to and found that their focus was broader in 2012 than it had been the year before.

One former Occupier was giving lessons in digital activism as part of “the global Cryptoparty movement,” which began in Australia. Â The newspaper of London Occupy, The Occupied Times, was still in production, butÂ “not as focused on London as it once was. It is covering stories from across the country â€“ and abroad.”

In 2012, Occupy also went local. Local Occupy iterations were different from the first wave of Occupy, started by the Occupy Wall Street encampment, in that they were less about the injustice of global capitalism, and more about addressing local problems. Â Occupy Sandy, which sought to crowdsource distaster response to Hurricane Sandy, is probably the best known in the United States, but it is only one example of this phenomenon.

In Boston, the Save the T campaign to protect municipal public transit included a group called Occupy MBTA. Â In Brazil, a group called Occupy Salvador came to the aid of “one of the oldest slave descendent communities in Brazil,” QuilomboÂ Rio dos Macacos, when the Navy threatened them with eviction. Â In Armenia, a group occupied Mashtots Park in Yerevan to protest its transformation from public Â green space into privatized market.

The current protests in Istanbul, dubbed #OccupyGezi, also started as an attempt to protect public green space from development. Â However, unlike other second wave protests, that took the Occupy meme and used it as a model for protest on local issues, the protests in Istanbul seems to be expanding in focus rather than contracting.

After police attacked the environmental protesters, new protesters joined in, with different motives ranging from the war in Syria to opposition to the government of Prime MinisterÂ ErdoÄŸan. Â In an article for The Telegraph of London,Â Mayor Kadir Topbas said that the original protesters who “genuinely care for the trees and the environment” were being manipulated by others with “political agendas.” Â Whether or not protesters are being manipulated, the aims of occupation are definitely expanding.

Does Occupy Gezi represent a third wave of Occupy? Â Occupy began global, with Occupy Wall Street and its protest of international capitalism. Â In 2012,Â OccupiersÂ were global, but their concerns were local. Â Occupiers around the world applied the methods and ideology of Occupy to campaigns against local injustices. Â In 2013, is Occupy going global again, by taking campaigns for local causes and expanding them to encompass national and international concerns? Â It’s too early to tell.

Occupy is a meme, a cultural concept with a commonly recognized meaning that can be easily transmitted and remixed. Â  It implies a central tactic – the occupation of public space as a protest of injustice – and has a set of values that is radically democratic. Â Beyond that it can be defined and refined according to whomever adopts it. Â It is a political movement deeply in tune with the digital age. Â Nobody owns Occupy. Â Everybody owns Occupy.