Complex and Contradictory: A New Way to Think of Digital Activism

The effect of digital technology on political contention is neither good nor bad, it is both. Yes, the Internet can help activists mobilize and re-frame public issues. It can also distract citizens and feed apathy. It can also help repressive governments watch and censor their citizens. The sooner we accept digital technology’s complex and contradictory effect on political power dynamics, the sooner we can move forward to answering more interesting questions about those effects. What contextual factors lead to these different outcomes? Why does one factor win out over others when all three are in play?

An article in the New York Times today shares interesting research by Navid Hassanpour, a political science graduate student at Yale. Navid’s research on the effect of cell phones black-outs during the Egyptian revolution revealed (through methodology not fully explained in the article) that decreased access to digital technology increased political engagement:

“The disruption of cellphone coverage and Internet on the 28th exacerbated the unrest in at least three major ways,” he writes. “It implicated many apolitical citizens unaware of or uninterested in the unrest; it forced more face-to-face communication, i.e., more physical presence in streets; and finally it effectively decentralized the rebellion on the 28th through new hybrid communication tactics, producing a quagmire much harder to control and repress than one massive gathering in Tahrir.”

These conclusions should not surprise anyone familiar with the revolution, as there was previous anecdotal evidence that the Internet shut-down forced people to seek information in the streets. However, demonstrating this phenomenon empirically is important.

However, the article’s author, the usually excellent Noam Cohen, makes an inaccurate conclusion from this evidence when he writes, “it is a conclusion that counters the widely held belief that the social media helped spur the protests.” Mr. Cohen still seems to be living in Dichotomy World: if turning off cell networks increased engagement, then their effect must previously have been exclusively distracting and apolitical.

It is far more likely that both conclusions are correct: digital technology facilitated both apathy and engagement. While the shut-down aimed to obstruct the work of activists already using the technology for resistance, and succeeded in that way by making the technology inaccessible, the countervailing effect of politicizing previously apolitical users overwhelmed the intended effect of stimying activists. 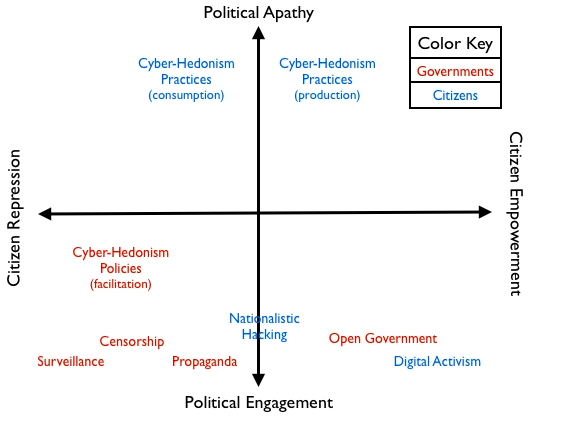 We need to stop answering digital activism questions as if their answers are either/or dichotomies and start looking at them as continua where multiple dynamics have countervailing and contradictory effects. As the diagram above shows, digital technology can facilitate both apathy and political engagement, repression and empowerment. Even the distracting effects of the Internet, which I label “cyber-hedonism,” can run the range from the mildly repressive (consumption only / watching a pirated movie) to the mildly empowering (production of original content / lolcats). Some phenomena, like the nationalist hackers of China and Russia who attack opposition web sites in support of the government, fall in a confusing middle ground. Their actions empower citizens (themselves), but they are also indirect tools of government repression.

The purist arguments that digital technology has a uniquely positive or uniquely negative effect on political contention is becoming less and less viable. Understanding this phenomenon requires a willingness to deal with complexity. F. Scott Fitzgerald wrote that “the test of a first rate intelligence is the ability to hold two opposed ideas in the mind at the same time, and still retain the ability to function.” This is what the field of digital activism demands of us if we are to understand it.

10 thoughts on “Complex and Contradictory: A New Way to Think of Digital Activism”