I’m currently taking Gina Neff‘s class on theories of technology and society. Â If you’d like to read along, we read Langdon Winner‘s classic essay, “Do Artifacts have Politics?” (pdf) as well as selections from Arnold Pacey‘s The Culture of Technology. Â (Although it wasn’t on the syllabus, I would also recommendÂ Wiebe Bijker‘s Â Of Bicycles, Bakelites, and Bulbs:Â Toward a Theory of Sociotechnical Change.)

These readings address the debate between social determinism (also called social construction) and technological determinism: Â Does society form technology or does technology form society? Â When asked in this way, most of us would answer “both,” Â but this is not usually how the argument goes.

There are eminent thinkers on both sides of the argument. Â WhenÂ Larry DiamondÂ talks about “liberation technology” he is implicitly siding with Langdon Winner, who believes that technology can have embedded politics because it can require or be compatible with certain types of political systems. Â  People in the State Department who talk about “Internet freedom” are also of this stripe, since the term imputes the value of freedom to the technology of the Internet, in addition to implying that the Internet should be freely accessible. Â Critics like Evgeny Morozov are firmly on the constructionist side of the spectrum: even the most beautiful technology can be made awful in Russia.

I think that both sides have a valid point. Technologies are indeed created by and connected to society, but they also have constraints and affordances that limit the roles and meanings they can have within that society. Â

The Internet began in the Bay Area in the 1960’s, created for the purpose of connecting researchers at different corporate and academic institutions. Â As the number and type of users increased, the value of the Internet expanded from one of research to one of business to one of entertainment and political expression. Â These uses then came to shape what we believe about the meaning of the Internet. Â While some people now justly fear the Internet because of the surveillance carried out through it, others see the Internet as a civic tool which repressive forces are encroaching upon. Â Both are right. Â The Internet is both threatened and threatens. Â These beliefs then form the values of the people who build upon the Internet, and the cycle starts again. 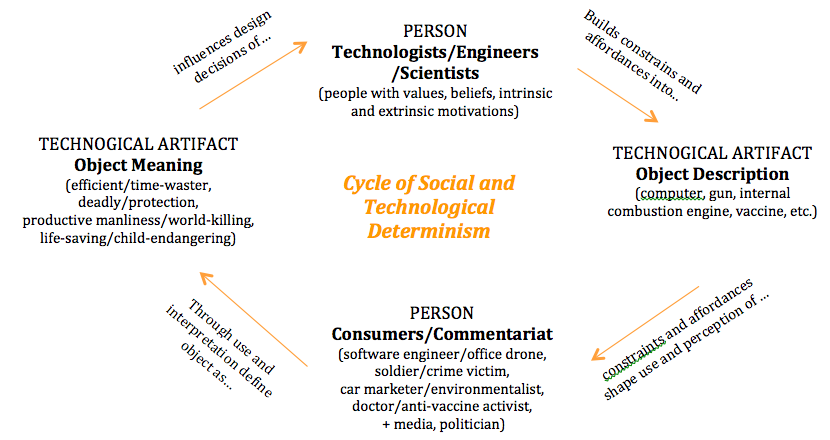 4 thoughts on “Does Society Form Technology or Does Technology Form Society?”