Evgeny Morozov and the Rhetoric of Contempt

Evgeny Morozov is perhaps the most skilled contemporary practitioner of the rhetoric of contempt. Â He seeks to win arguments (and attention) by treating ideas he dislikes with scorn and ridicule and by treating their proponents with mockery and cruelty. Â He encourages this behavior in others. Â The exchange below, which happened earlier today, is a good example. 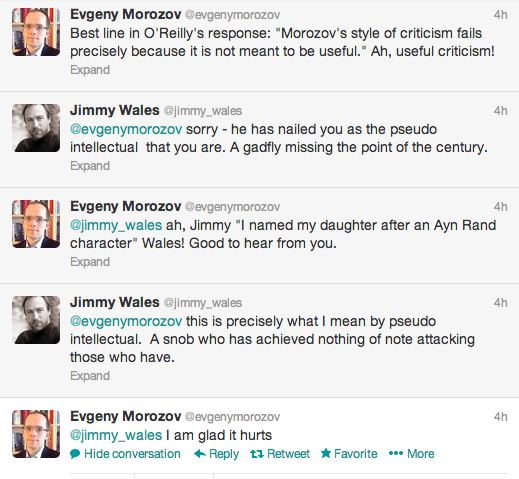 When I first met Evgeny in 2008 he was a journalist, working for The Economist. Â He was smart and entertaining. The mean-spirited Â persona only came later. Â He honed it on his (now abandoned) Foreign Policy blog, Net Effect, and then parlayed that persona and style of argument in a very successful and misleading book, The Net Delusion. Â That book was published just as the Arab Spring was getting started. Â It soon became clear that his argument – that those who are optimistic about the liberating power of the Internet are deluded – was simply untrue.

So he has turned his gaze to Silicon Valley and has started attacking Tim O’Reilly and Jimmy Wales instead of the State Department. Yet he has maintained the rhetoric of contempt, inserting vitriol into important discussions, misleading the unsophisticated, and muddying the waters of real intellectual inquiry with ad hominem attack and straw man arguments.

I have not asked Evgeny about his rhetorical strategy, but I would bet that it is strategic. Â I think Evgeny enjoys being contemptuous, but he is also smart enough to realize that it works. Â The tweet at left, from Max Bulger, a student at Tufts University, is illuminating. Â Evgeny won’t talk to a student about his ideas, but he will bait the big fish like Jimmy Wales and Tim O’Reilly on Twitter to increase his own name recognition. Â Evgeny has 36 thousand followers. Â Jimmy Wales has nearly 82 thousand. Â Tim O’Reilly has 1.7 million. Â You do the math. Â I bet Evgeny has.

So, this post is not a plea to Evgeny to stop using the rhetoric of contempt. Â It works well for him, so he has no reason to stop. Â It is rather a suggestion to others not to fall into his trap by responding or (worse yet) responding in kind, as Jimmy Wales did. Â Don’t feed the (intellectual) troll.

3 thoughts on “Evgeny Morozov and the Rhetoric of Contempt”