Derailment is important because it’s a weapon againstÂ social change.

#Whitelivesmatter is a thing? SERIOUSLY? We already know you matter. You just want a reason to derail #BlackLivesMatter

People who support social change need to know how to identify it and how to combat it.

DerailmentÂ “diverts a discussion about one issueÂ into a discussion of another issue”*. Â It is a tactic of misdirection that deflects attention away from complaints about the abuse and wrongdoing of those in power and towards a different topic that does not challenge those interests.

Why Do People Derail?

People derail for the following 4 reasons:

Description: These derailers believe that the topic of discussion is a personal indictment of their own wrongdoing. Â This sense of being accusedÂ may be real or imagined.

Description: In this case, theÂ change implicit in the critique would reduce the power or wealth of the derailer.Â Â Even if an individual or group is never explicitly accused of wrongdoing, they might suffer from reduced position or resourcesÂ if change to the abusive or unjust situation occurs.

Example:Â A firm that builds drilling equipment for the oil industry might seek to derail legislation about climate change. Â Even though these manufacturersÂ areÂ rarely accused of wrongdoing in the climate change debate, their livelihoods would be harmed if limitations on drilling occurred.

Example: A white person might derail a discussion of police violence against people of color because they wish to continue believing that police are a force for law, order, and moral uprightness.

4)Â Agents of the Above

Description: The derailer in this case is acting on behalf of groups or individuals who fall into the above three categories.

Example: We don’t know Megyn Kelly’s personal feelings about Black Lives Matter, but when she brought up black-on-black violence in her interview with Cornel West last week (image above), she was furthering the conservative agenda of her employer, Fox News, by derailing critique of racist policing.

What Are the Types of Derailment?

Graphically, all derailed topics look sometime like this before they are derailed: 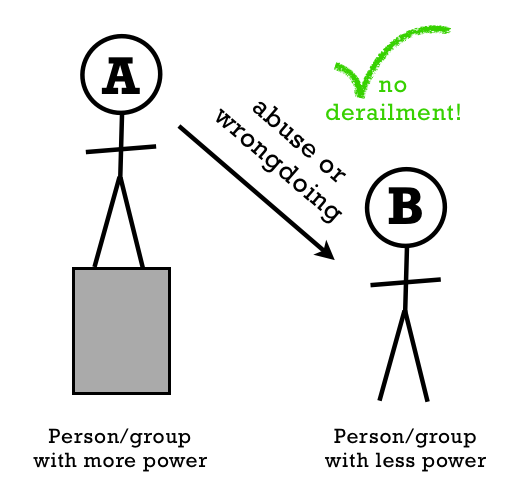 There are sevenÂ ways to derail this type of topic, each of which seeks to undermine or modify some element of this model. Â They are:

Learn them so you can identify them when you see and hear them. Â Then call them out for what they are: efforts to silence criticism of the status quo, protect those in power, and divert attention away from change. Â (See an alternative list here.) 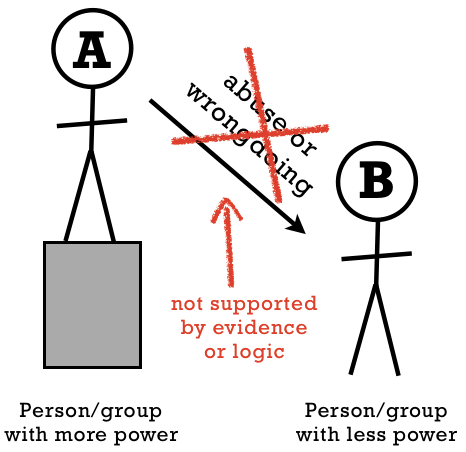 Description: These derailments seek to identify a flaw in the logic or evidentiary basis of the challenging topic. Â These types of arguments are particularly popular with men and conventionally-educated people, since they are taught they are more logical than other groups. Â It is also common among people who do not think they are not prejudiced, because they are attacking the argument rather than the speaker or group making the complaint.

Example: “All murders/homicides are terrible. But if we run the numbers….”* 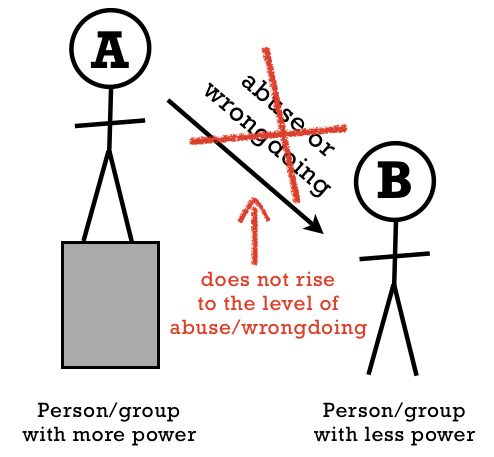 Description: ThisÂ form or derailment also seeks to blunt or undermine the argument itself. Â Unlike the rationalist derailer, however, the minimizing derailer attacks the argument by minimizing its importance.

There are a number of tactics minimizers use. Â They may claim that the wrongdoing or abuse was “just a joke” and not a serious threat.

Another common tactic is to play Oppression Olympics and minimize the suffering of (B) compared to a group that is even worse off. Â This is the tactic my own father used when I tried to talk to him about the rights of sweatshop workers overseas. Â “Would you prefer they were starving subsistence farmers?” he asked. Â “At least they have jobs.” Â Counter to his line of argument, the existence of a graver wrongdoing does not negate the presence of a lesser one.

Examples: “It’s just a joke.” Â “Why are you making such a big deal of it?” Â “These people are actually lucky. [X Group] hasÂ it much worse.” 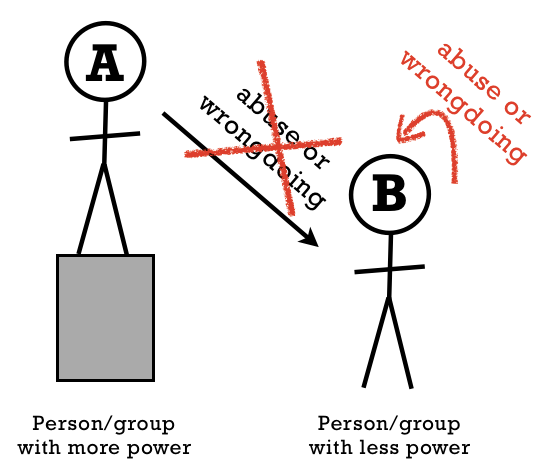 Description: This derailment is ingenious and extremely popular, even though it makes very little sense. Â In this common derailment, the derailer suggests that the victim of oppression, rather than the oppressor, is responsible for the victim’s suffering.

When this derailment is used, it often means that the derailer cannot deny that some suffering occurredÂ (poverty, murder, unwanted sexual intercourse). Â Since they cannot deny the suffering, instead claim that the injured party (B) injured themselves or incited the more powerful party (A) to injure them. Â This argument of this derailmentÂ is “stop hitting yourself,” and is just as ridiculous.

Examples: Blaming the poor for their poverty, blaming black people for being the victims of violence (black-on-black crime derailment), blaming rape survivors for being raped.

Description: HereÂ the derailer acknowledges that party (A) did at some time abuse or engage in wrongdoing toward (B). Â However, at this point (B) is guilty of perpetuating or even augmenting that wrongdoing. Â The derailer is arguing that the speaker is creating the injustice by pointing out its existence.

In fact, the exact opposite is true. Â Ignoring injustice perpetuates it. Â Speaking about it is the first step towards remedy. Â This is Â precisely why the discussion is being derailed. Â Derailment aims explicitly to silence those who speak about injustice in order to prevent remedies that will change the status quo. 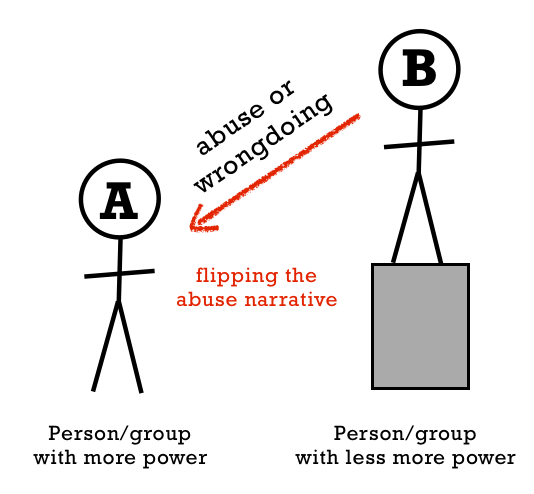 Description: Â If you thought the Victim-Blaming Derailment was crazy, this one’s even nuttier. Â In the table-turning derailment, the person being accused of oppressive behavior claims that, actually, they are the victims.

This derailment diverts the original discussion by completely flipping the dynamics. Â The abuser has become the abused. Â Their narrative becomes privileged. Â The victim becomes the abuser. Â Their narrative is sidelined and undermined. Â It’s so crazy it might just work (and it does).

Description: Ad hominem means “to the man.” Â It refers to personal attacks. Â This derailment is popular because it is the laziest and easiest derailment. Â The derailer doesn’t need to make any critique of the argument or the context. Â They just need to find some defect in the person making the argument and point it out. Â The laziest of these derailments is to make a criticism of the person’s appearance, which doesn’t require that the derailer even think about the person, but only look at them.

The slightly more sophisticatedÂ derailer willÂ criticize the speaker’s character. Â  This derailment works because people will often not believe a claim made by someone who has been identified as flawed. Â For example, the speaker may be called overly-sensitive or angry. Â The implication is that the content of the critique is driven by emotion rather than fact.

Counter to this logic, anger is actually not connected to the validityÂ of an argument. Â In fact, if I am arguing about a serious injustice that is being minimized or ignored, that’s a completely valid reason to be angry.

Example:Â “Danny–You’re a total loser,” “he is just so pathetic and easy (stupid),” “I’d look her right in that fat, ugly face”Â (Donald Trump tweets and comments.) 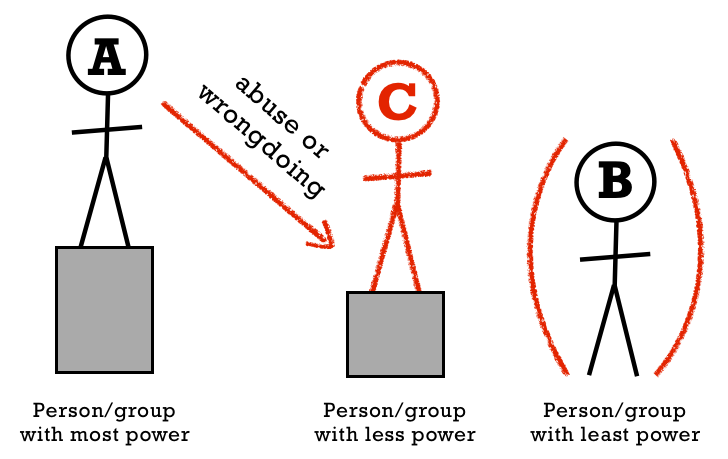 Description:Â These derailments are in a way the most innocent kind. Â The derailer may not even realize they are derailing. Â The derailer simply shifts the conversation to themselves. Â I’ve called them NarcissisticÂ Derailments and their spirit is well-expressed in this awesome tweet:

I am feel uncomfortable when we are not about me?

This is a very common type of derailment for an ally to engage in unconsciously. Â  Allies (C) are generally people whose power is between the person or group accused of wrongdoing (A) and the group doing the accusing (B). Â If allies keep the focus on the group with less power, their allyship is helpful. Â If they turn the attention on themselves, they divert attention away from the group making the claim and do them harm.

We are all naturally interested in ourselves and will see any issue from the perspective of our own experience. Â However, as allies we need to police these reactions andÂ keep the focus on the groups were have allied ourselves with. Â This time it is really not about us.

So why are these comments, which seem to embrace the values of equality and fair treatment, really so horribly damaging? Â It is because this derailmentÂ erases the abuse and wrongdoing, pretends it does not exist. Â If an injustice is not acknowledged it can never be righted.

How to Fight Derailment?

Of course, derailments are rarely used individually out in the wild. Â For example, what about this combo move?

Black Person: “I get stressed every time I see a police car in my rearview. Â Driving is just too much.”

White Person: “Why are you so upset, Bro? Â The cops pullÂ me over sometimes and nothing bad ever happens. ” Â  Â Â

This is indeed a powerful derailer. Â Let us unpack the many derailments he has deployed in so few words:

Here’s how the black person could respond. Â With a Rationalist derailment, using statistics, facts, figures can be an effective rebuttal.

Black Person: “Well, Dude, if I appear emotional it’s because this is a frigging terrifying situation. Â Also, we’re not talking about your experience. Â We’re talking about my experience. Black people are being killed by police at more than twice the rate of white and Hispanic or Latino people in the US. Â If you don’t believe me, check out this article in The Guardian. Â Also, never ever question my experience of my own life again.”

And then the moment of truth comes.

If this Dude is merely ignorant, then he should apologize immediately. Â If he doesn’t apologize, or even gets defensive, you know you are not dealing with a friend, but rather a narcissistic and irrational racist who would rather attack a friend than question even the smallest part of his worldview or try to empathize with an experience not his own. Â Kick him to the curb. Â At least youÂ provided a teaching moment, even if Dude was unable to appreciate it.

What are your strategies for combatting derailment? Â Tell me in the comments.