I was very hopeful when I saw this headline from a local Fox affiliate in Houston:Â Digital activism replacing marches and rallies in Houston. Â The term “digital activism” rarely gets play in traditional media.

I thought the story Â might be about how digital media was allowing activists to create more effective and innovative tactics. Â Yet the story was more of the pessimism and misrepresentation that too often found in traditional media representations of digital activism.

The story was primarily an interview with a University of Houston sociologist, Luis Salinas. Â About halfway through the article that classic term of cynicism and misrepresentation – “slacktivist” – popped up.

“The word is ‘slacktivist’ where somebody is just clicking on ‘like’ or retweeting something and that person really thinks they are really active in the issue. Doing it in person requires so much more effort so much more commitment in a certain sense,” said Salinas.

But when it comes to fighting for causes what Salinas sees as a digital half measure has the clear momentum to become the norm. 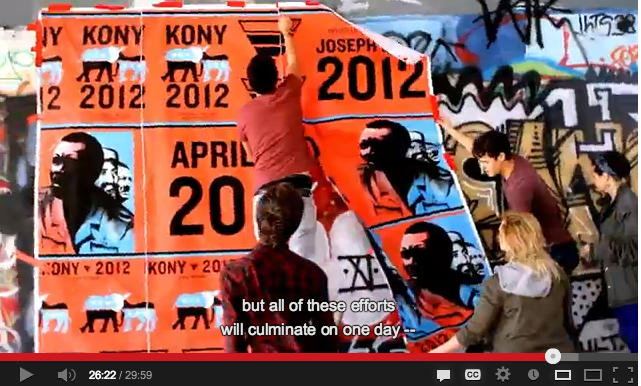 Even the (in)famous Kony 2012 video was used to promote an offline postering event called “Cover the Night.”

“20 or 25 years from now protests may not even take to the streets anymore. It may take a different form. You may see multiple protests in social media, but you will see very few in the streets,” said the veteran activist.

Yet this interpretation is disproved by many, many examples of digital media being used to plan and then amplify offline actions: the Arab Spring, 15M in Spain, Occupy. Even the (in)famous Kony 2012 video was used to promote an offline postering activity called “Cover the Night.”

Ethiopian Muslims in London use Facebook to amplify an offline rally for religious autonomy in their homeland.

Digital media allows people to take political action from in front of their computers, this is true. Â But the future of activism is much more likely to be hybrid – Â a mix of digital and offline tools and tactics. Â This is the future that is emerging today. Â It would have been nice to see the Fox journalist cover the other side of the story.