The Interoperability of Digital Activism

It is difficult to convert online power into offline power to achieve political change.

Even outside the realm of activism, interoperability is often lacking. You know how your iPhone charger won’t plug into your friend’s Nokia phone? How your Mom’s old version of Word won’t open your new .docx file? How you can’t plug your hairdryer into a European socket? These are all examples of technologies that should work together but, because of design choices, do not.

We can think of the interaction of online space and offline space in a similar way. Theworld of bits and the world of atoms, in Zeynep Tufekci’s terms, are two complex systems. Sometimes they interoperate well: think ofonline payments. When you buy something online, your bank account reflects that change. When you take cash out of an ATM, you can see that change when you log into your account online. Sometimes they don’t. Think ofonline dating. Someone can look great on their profile and sound great in their emails, but when you meet, you have absolutely no chemistry.

Activism is another activity for which interoperability between online and offline space often does not work well. The Kony 2012 campaign gained more video views in a shorter period of time than any digital video in history. One can assume that at least some of these 100 million+ viewers were honestly moved by the documentary and wanted to do something to catch Kony and help child soldiers. But there was a problem with interoperability. That intensity of interest and concern online did not convert into the capture of Kony offline. The realities of international politics and central Africa geography refused to interoperate with the aggregation of interest and will that the network permitted.

In Egypt, activists were able to use a blog community and a Facebook group to grow a small, young, liberal, and pro-democratic civil society in the early 2000’s that was critical in bringing down Mubarak but is still under-strength when compared to much older and better established groups like the Muslim Brotherhood.

Interoperability is more difficult when the task is more difficult. Using online and offline space to organize a rally is more easier than using online and online space to nominate and elect a candidate for national office. (In the US,America Elects had a similar problemof interoperability when they tried to nominate a presidential candidate online.)

This is the problem with many instances ofso-called “slacktivism”– the organizers were unable to figure out how to transform online interest into offline impact. They could not figure out how to get the two systems to interoperate. Even when solutions are found, they can have a short shelf life as the opponent counter-innovates. Just think of once-formidable Wikileaks.

Interoperability is difficult because online and offline spaceareradically different systems with radically different rules. It is difficult to transfer power between the them. The offline world is geographically-divided, money-driven, and hierarchical. The online world is networked, free/low-cost, and peer-based. Trying to transfer networked people power into a hierarchical political system can run up against fatal rode blocks. Trying to transfer massive online interest into massive offline action is also difficult, even when trying to mobilize a single group of individuals.

Even these distinctions blur, because the two systems influence one another. We have seen ways in which the offline space has influence the online and vice-versa. The Pirate Party brought the peer production of the network into the hierarchicalstructureof government. The Chinese government used censorship technology to create its own national intranet that would match its geographic boundaries and abide by its national laws. 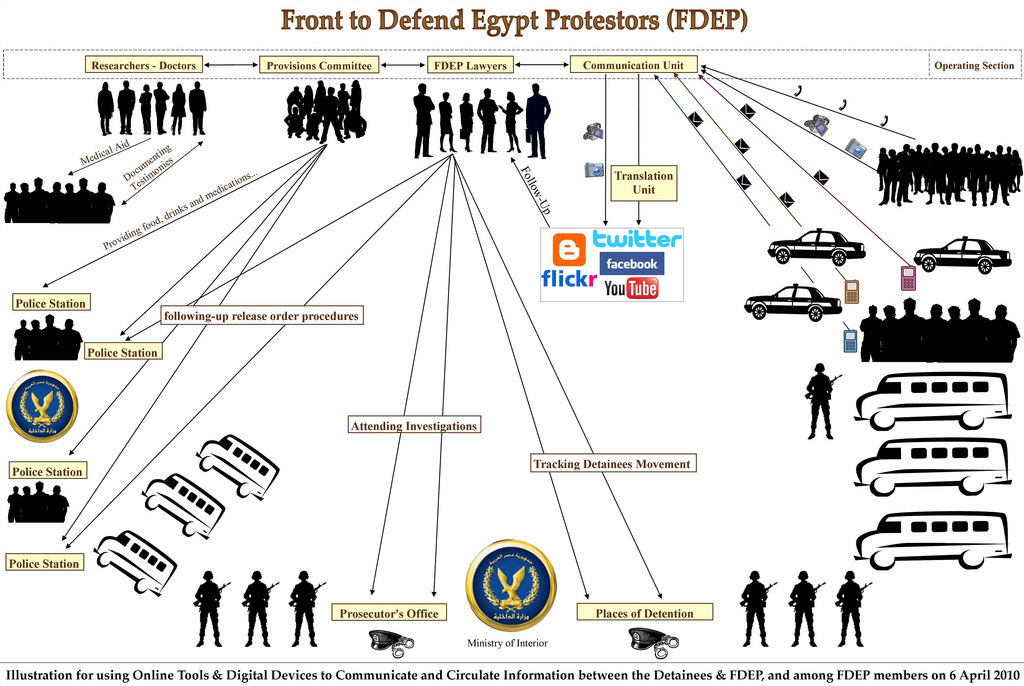 Successful interoperability between online and offline worlds requires a strong understanding of both, from the mechanics of Twitter to the arrest process used by the capital police.

Yet someactivists are figuring out how to digital and physical space can interoperate better. InSpain, activists used quick and peer-based crowdfundingsubmit a legal complaint to the slow and hierarchical Spanish judicial system. In Egypt, theFront to Defend Egyptian Protesters has worked out a resilient system (image, left) to link protesters in danger with offline assistance by using a range of digital tools. Interoperability is not easy, but it is possible, and activists are understanding it better every day.

5 thoughts on “The Interoperability of Digital Activism”