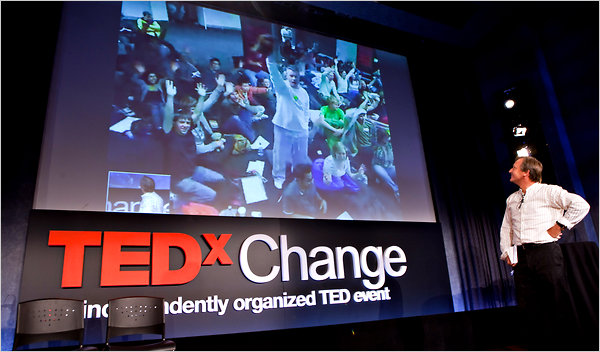 TED made themselves generative. Will other nonprofits follow? (Image: NYTimes)

In 2009 TED, the prestigious global ideas conference, made an unusual decision: they created the free TEDx license and let anyone hold a TED conference. Now there are six or seven TED conferences every day. TED is influential because of the incredible prestige of being asked to speak there. That prestige is partially a result of limited supply of speaker spots: high demand + low supply = high prestige. Â One would think that more conferences – and more speaker spots – would weaken the TED brand, but it has done the opposite. According to The Economist, “these events seem to add to the lustre of the main conferences, rather than diluting them.” By opening up the brand, TED has “inspired people to contribute to it for nothing.” TED allowed itself to become generative.

To be generative is to inspire and permit independent creative production.Â  The term entered the popular lexicon in 2009 inÂ The Future of the Internet–And How to Stop It, a book by legal scholar Jonathan Zittrain. In the book, Zittrain explains that the Internet became popular because it was generative: people were able to build things on top of it without the assistance or permission of its creators. The inventors of blogs, wikis, web pages, and computer viruses did not need to ask any owner of the Internet permission. The Internet both inspires and permits creative production not imagined or controlled by its creators. Generativity applies not only to technical systems, it also applies to social systems.Â  In February of 2010, a Mercedes carrying the vice president of Russia’s largest oil company, Lukoil, crossed into oncoming traffic, slamming into a small Citroen and killing its twoÂ occupantsÂ  The Mercedes had “special license plates” that made it exempt from traffic laws for no reason other than the elite status of the driver.

When official media gave an unlikely alternative version (it was the Citroen’s fault), bloggers called bullshit on the story and a rapper created an original rap video about the incident (“all video cameras break when they capture the evidence of my crime. You can shove your public opinion”). Another video, shot like a TV ad, shows a car doing crazy stunts to reach a Lukoil gas station.

Though the Lukoil official was not punished, the campaign birthed at least two durable civic organizations. Â The LiveJournal communities Antimigalk and Blue Buckets Society, founded in the wake of the Lukoil case, are dedicated to achieving a ban on these special plates. While Antimigalki publishes photo and video evidence of violations, The Blue Buckets Society (named after the blinking blue flashers VIP vehicles use) organizes flash mobs.Â This is certainly something new: instead of civil society organizations creating a campaign, the campaign created civil society organizations.

The campaign against the impunity of the Lukoil executive was a generative campaign. Â It was open and participatory.Â No one claimed it as their campaign or took a leadership role. They inspired Â a response, but did not define what it should be.Â The message of the original activists was clear: “This situation is ridiculously wrong. There is a community of people that care about it. We invite you to be one of us.”

Generative Civil Society in the US

“This situation is ridiculously wrong. There is a community of people that care about it. We invite you to be one of us” is a phrase that could equally be applied to the “binders full of women” campaign that helped to mobilize women against Mitt Romney last fall. The words were spoken by Romney during the second debate. A day later, according to Wikipedia:

TumblrÂ pages had been created illustrating commentary on the phrase,Â tweetsÂ and original works of art had been produced, and aÂ FacebookÂ page about “Binders Full of Women” had received 274,000 likes.Â Amazon.comÂ received a barrage of satirical reviews forÂ binders, with thousands of users marking the reviews as “helpful”…. A parodyÂ TwitterÂ account that portrayed itself as a binder owned by Romney attracted 30,000 followers before the debate was even over.

Formal nonprofits, like EMILY’s List, which fundraises for female candidates, participated in the campaign (see image above), but as a peer, not as a leader. The #bindersfullofwomen meme was a wave, and they decided to ride it.

As in the Russia case, disconnected individuals (the creator of the Tumblr account, the Amazon commenters, women and men who wore binder costumes for Halloween) began by creating cultural artifacts (images, blog posts, reviews) that were shareable and “joinable.” The Tumblr account accepted submissions. Anyone could write or up-vote a satirical review. Anyone could share an image with their friends.

It was a campaign started by no one, controlled by no one, and accessible to anyone. It grew more quickly than a traditional centrally-organized campaign and reframed the Romney campaign as anti-women when he was trying very hard to demonstrate that he was pro-women. It was amorphous, unpredictable, and powerful. The campaign was co-created by anyone who chose to add to it. It inspired and permitted creative production.

What are the lessons for formal nonprofits in this new generative environment? Riding the wave, as EMILY’s List did, is a good way to get increased attention and even to raise money. Â The TED model should also be explored:Â Define the core mission of your organization and make it generative by inspiring and permitting others to create independent content that furthers that common goal.

Here are some more tips for creating generative campaigns:

The political scientist and communication scholar Lance Bennett, describes the structure for generative campaigns (which he call connective action campaigns), in the following way. Â Nonprofits can emulate this structure.

If the new civil society is generative in that it inspires and permits independent creative production, what makes it so? Based on these two examples (and there are others, like the Arab Spring, the Occupy Movement, and theÂ 2008-09 European student protests), the Internet, and particularly social media, appear to be of central importance. Anyone can create a compelling frame for a public issue, have it quickly disseminated over a range of social platforms, and also use those platforms for collective action.

Social media provides both the motive and the means for generative civil society: people can share their criticisms of the status quo on these platforms and also form connections with one another to take collective action in response. A campaign can start anywhere, or in many places at once, and various forms of participation. Â A campaign can grow quickly of fizzle. Â Generative civil society is more resilient and harder to control. Â It is also less predictable and potentially less durable. Â As digital technology changes, it will be important to view changes with a critical eye.

One thought on “The New Age of Generative Civil Society”