The Power Implications of Sex Work Over Skype 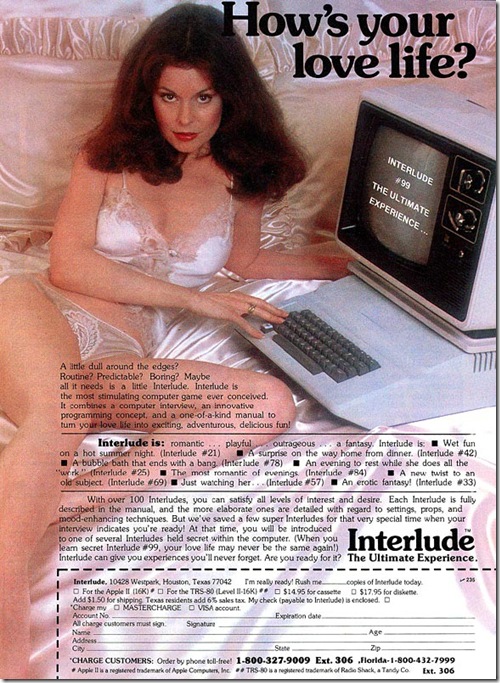 Ad for Interlude, a sex tip game from the 1980’s. Computer sex has advanced far since then.

Today I came across an interesting comment on Jezebel:

…The way I started was I put up one free video on Youtube, got some fans, then I had some pay clips on clipsforsale as well as setting up skype appointments with people. Some of them just wanted to talk to me because they thought that I looked really interesting (I have a shaved head and facial piercing, but I wear fluffy dresses and make up, apparently that is strange to these men) Others wanted to just sit there quietly and watch me smoke/eat/ paint my toe nails.They pay through paypal.

YouTube, PayPal, Skype, (paid fetish clip site) Clips4Sale- are these the new frontiers of sex work? Is this even still sex work? I’d say yes, since there is a transaction of money for sexual arousal. Why am I writing about this on a digital activism blog? Because it’s an interesting case study of the way technology affects power dynamics. The commenter continues:

So, not only is this women earning money by doing things she considers weird but not degrading, there is no pimp or other economic exploiter – she’s an independent operator. Also, she’s not putting herself in danger physically, either of contracting an STI or of being raped of physically assaulted by a john. I’d say this is a positive development.